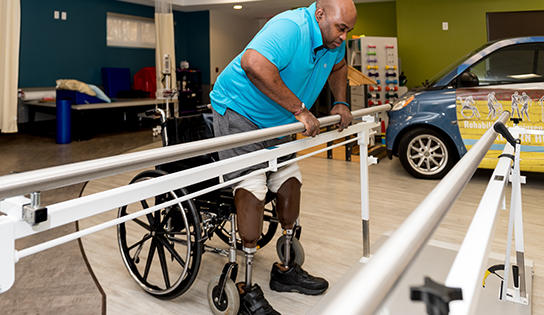 Albert Bleakley arrived to The Emerald Peek Rehabilitation and Nursing Center on August 2, 2017. He was post stroke and right below the knee amputation, looking to get back on his feet. He was weak and concerned that he would not be able to get back to doing what he loves: spending time outdoors and with family. He lived with his sons and grandchildren (and his beloved dogs, too) and wanted to make sure he would be able to return home and enjoy them all! Sandy Gomas, RN Care Manager, greeted Mr. Bleakley and his sons upon their arrival at Emerald Peek. The team, including Tom, our Rehabilitation Director and Katie Cullum, Director of Concierge Services, met with Albert and his family to let them know what the next few days would bring. Within 18 hours, Albert’s rehabilitation had begun!

Weeks 1-4 of the Patient’s Stay

The team quickly learned a couple of very important things about Mr. Bleakley: he is passionate about working with his hands (he is a bricklayer), his family and being independent. The team also learned Mr. Bleakley was scared and thought he would not be able to be independent. The interdisciplinary team knew that in order to make Albert more comfortable and feeling safe, his rehabilitation needed to start immediately. Short term goals of increase trunk strength, better sitting balance and upper body dressing was set by Susan, Albert’s Occupational Therapist. Yosef, Albert’s Physical Therapist, set short term goals of using siderails to improve bed mobility, functional transfers with close supervision and hop ten feet with walker. Although quiet and apprehensive, Albert met each of these goals within three weeks of his arrival. Now, it was time to move on to long term goals.

Dennis and Todd spoke regularly with Albert and Albert’s sons regarding the process for a prosthetic as well as offering emotional support throughout his rehabilitation. The connection with Dennis and Todd provided Albert some insight into the challenges that lay ahead for him, but now knew that those challenges would be surmountable. Albert met with George, our Prosthetist, for an initial fitting for his prosthetic.

During her evaluation, Katie, the Therapeutic Recreation Director, noted Albert is a veteran of the Army and very interested in music and baking. Katie ensured that Albert participated in all music activities and cooking classes. Albert also participated in the community’s Veterans program in October (and November as well).

As Albert progress through his rehabilitation, his confidence and demeanor improved. He was more outgoing, comfortable and able to see that his hard work was coming to fruition. Susan set long term Occupational Therapy goals, such as Lower Body dressing and putting on a Shoe independently. This may seem like a small task, but to maintain the balance and strength needed is not easy. For Physical Therapy, Yosef increased the Ambulation distance to 25 feet without prosthesis, functionally transfer with no assistance, and ascend/descend four stairs without assistance.

Mr. Bleakley also received his prosthetic. During his 11th and 12th week with us, he not only met all his long term goals, he ambulated 150 feet with the prosthesis, allowing Mr. Bleakley the independence he so desired. He showed off his ambulation skills at our Amputee Walking School event on October 28th.

Within a week of Patient’s Discharge

Mr. Bleakley was discharged from our care on November 10, 2017. During his discharge, Albert’s grandson was there and was very excited to see his grandpa walking. His sons were excited as well. Albert told the team, “Thank you for everything. I can go home and participate in my life at home with my family, go outside and play with the dogs again. Thank you all so very much!”